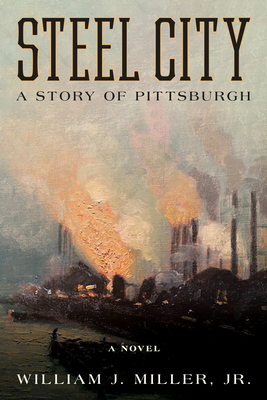 Steel City is the story of the 1890’s golden age of Pittsburgh when its technological innovations and wealth creation made it the Silicon Valley of its day. Pittsburgh was first in steel, food processing and electricity, and the leaders of those industries – Carnegie, Frick, Heinz and Westinghouse -are names we still know today. Amid this fevered atmosphere Jamie Dalton, a recent Yale graduate and son of a corporate lawyer, must decide whether to accede to his father’s wishes and pursue a career in law or the steel business, or follow his own instincts and become a newspaperman. The greatest natural disaster of the 19th century, the Johnstown Flood, confirms his choice to be a journalist, and Jamie goes on to cover Pittsburgh’s business titans, labor strikes and assassination attempts. While reporting on the unions of the era, he is exposed to a very different world, symbolized by his infatuation with a mysterious woman under the sway of an Eastern European anarchist. Jamie struggles with balancing the access he has to Pittsburgh’s business elite while maintaining the objectivity to tell the hard truths about those same people. Ultimately, he must thwart a terrorist plot that could disrupt the massive corporate merger that would restructure the nation’s largest industry: steel.