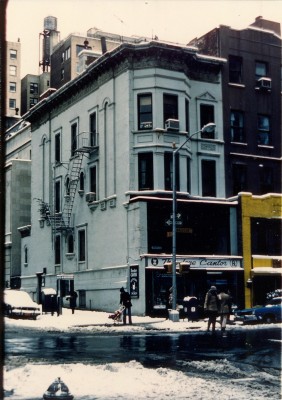 In 1976 we purchased an 1890s brick-and-brownstone “handyman special” on the southeast corner of Madison Ave. and 93rd St. The ground floor commercial space, which had been occupied by a pharmacy for almost 50 years, had an exquisite interior that boasted a terrazzo floor, tinned ceiling, and wood cabinetry, dating from the 1920s, all hidden beneath many layers of grime and paint. A skillful craftsman, Ray resolved to restore the space to its former elegance, and as we were both bookstore addicts and well aware that there was none in our neighborhood of young families and private schools, we decided to open one ourselves.
The name we chose for the store was inevitable. As Ray said at the time, “We’re on the corner of Madison Avenue and 93rd Street. No matter what we name it, it’s going to be called The Corner Bookstore!” Ray designed an old-fashioned storefront and made the sign by cutting wooden letters out with a jigsaw and gilding them with 14-carat gold-leaf foil. 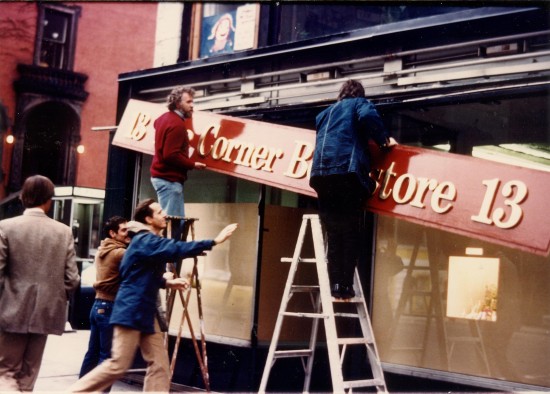 Once the bookstore was established, we tackled the restoration of the outside of the building whose fine, smooth brick-and-brownstone facade was obscured by dull grey paint. The process of removing the paint began with smearing an ugly yellow-green paste over the whole of the building. (Countless times we were asked, “You’re not going to paint it that hideous green, are you?”) The neighborhood breathed a sigh of relief when finally the green goo was washed away and the beautiful red brick, that had been hidden for so long, was revealed. “It was like magic!,” one neighbor said. Pots with bright-red geraniums and hanging ivy, installed on the side-window ledges and all along the front of the building directly above the store, were the finishing touches. 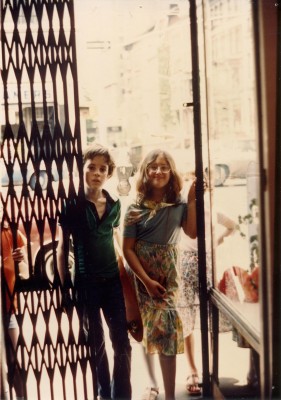