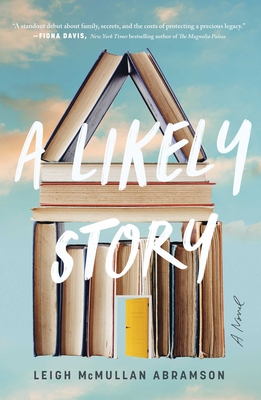 Growing up in the nineties in New York City as the only child of famous parents was both a blessing and a curse for Isabelle Manning. Her beautiful society hostess mother, Claire, and New York Times bestselling author father, Ward, were the city’s intellectual It couple. Ward’s glamorous obligations often took him away from Isabelle, but Claire made sure her childhood was always filled with magic and love.

Now an adult, all Isabelle wants is to be a successful writer like her father but after many false starts and the unexpected death of her mother, she faces her upcoming thirty-fifth birthday alone and on the verge of a breakdown. Her anxiety only skyrockets when she uncovers some shocking truths about her parents and begins wondering if everything she knew about her family was all based on an elaborate lie.

Wry, wise, and propulsive, A Likely Story is punctuated with fragments of a compulsively readable book-within-a-book about a woman determined to steal back the spotlight from a man who has cheated his way to the top. The characters seem eerily familiar but is the plot based on fact? And more importantly, who is the author?