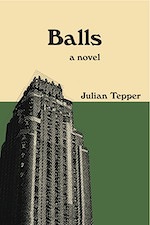 A New York story, a dark comedy, Balls tells of the thirty-year-old Henry Schiller, a songwriter and lounge-player, in love with a woman far younger and more musically gifted than himself, one with her eye on other men and the rise of her own career, whose crisis deepens when he discovers he has testicular cancer.

New York native Julian Tepper is a man of many talents. As the bass player for the indie rock band The Natural History, he co-wrote Spoon’s hit “Don’t You Evah” and helped produce the band’s two studio albums,Beatbeatheartbeat and the People That I Meet. Film director Stephen Daldry casted Tepper in a featured role in 2011’s Extremely Loud and Incredibly Close. Julian is the co-founder of the The Oracle Club, a salon and workspace for artists and writers in New York. Balls is his first novel.